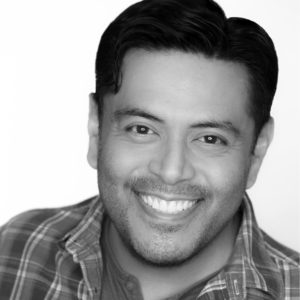 Joe Camareno is an American entertainment professional who hails from Los Angeles. He is also a multi-award-winning producer, writer, director, and a producing partner and co-owner of Celtino Entertainment Group (CEG). He was nominated for a 2019 Imagen Award in the Best Actor category for Tin Holiday, alongside Antonio Banderas, Andy Garcia, and Anthony Ramos.

​A true New Media pioneer, Joe took Best Audio Recording honors for his comedic narrative podcast Virgin Falls (2006 Parsec Award), one of the first podcasts of its day. Most recently, he was the series director for the web series Sister President, as well as the educational web series Fixing Paco, starring Paul Rodriguez. Joe’s work on “Paco” lead to him taking Best Director honors at the 2012 Reel Rasquache Film and Art Festival, and the series went on to receive a 2013 People’s Telly Silver Award for Best Program or Webisode, in addition to several 2013 and 2014 Imagen Award nominations, Joe was also the series director and producer for the 2010 Imagen Award-winning web series Ylse.

​With a solid background in theater and live show production, Joe has produced and directed a number of original plays at theater companies across Los Angeles, including the critically acclaimed Lost Angeles at the Lillian Theater in Hollywood. As a writer of educational children’s shows, Joe co-wrote The Environmental Defenders, produced by the Los Angeles County Department of Public Works (LACDPW), as a touring production for the Los Angeles County elementary schools from 1995 to 2005. Praised for its merits by educators and a fast favorite among students, The Environmental Defenders won numerous awards, including the 1999 Productivity & Quality Award of Los Angeles County; the 1999 PRSA Prism Award; a 2001 Telly Award; the 2000 National Association of Counties Achievement Award; and the 2000 Association of Visual Communicators Award of Distinction.

​As an actor, Joe has a career spanning over 25 years in front of the camera, having performed in more than 400 TV commercials and over 600 radio spots. He has been a campaign actor for Farmers Insurance and AT&T, as well as the campaign voice for Homeland Security, White Castle, Burger King, Taco Bell, Citre Shine Shampoo, and most recently, NutriBullet Rx. He has guest-starred on many hit television shows, including memorable recurring roles on The Shield and Unfabulous. Film roles include Expired, Tin Holiday, and Edith & Harvey.

His latest feature film Tin Holiday has garnered multiple nominations and wins including Best Director, Best Comedy, and Best Story all across the globe.