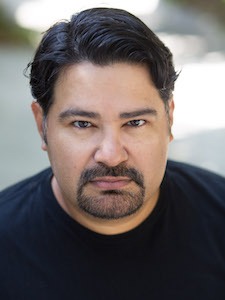 THE BOOK OF HANNAH

Mando Alvarado is an award-winning playwright/screenwriter from Pharr, Texas.  His play Parachute Men had its world premiere at the Victory Gardens Theater with Teatro Vista. His play Basilica premiered Off-Broadway at the famous Cherry Lane Theater in NYC. His play Post No Bills received its Off-Broadway premiere at Rattlestick Playwright’s Theater. His new play, Diablo Love, had its world premiere at Central Park’s Summer Stages. They also produced A King of Infinite Space, a Hamlet/Pearl Jam mash-up and Sangre, an adaptation of Blood Wedding. He also co-wrote the book for the bilingual musical A Yellow Brick Road, an adaptation of Wizard of Oz for Theaterworks USA which received its critically acclaimed Off-Broadway premiere at The Lortel. His first feature film, Cruzando, which he co-wrote and co-directed with Michael Ray Escamilla is available on DVD and was distributed by Vanguard Cinema.  He is a member of Rising Phoenix Rep, alum of INTAR’s Hispanic-Playwright-in-Residence Laboratory 2006 – 2008, an alum of Company of Angels writer’s group, and a graduate of The University of North Carolina School of the Arts.  He is currently an Executive Story Editor on VIDA for Starz. Previously he was a staff writer on Greenleaf for the OWN Network and is also a Co-Producer for Netflix’s Seven Seconds.