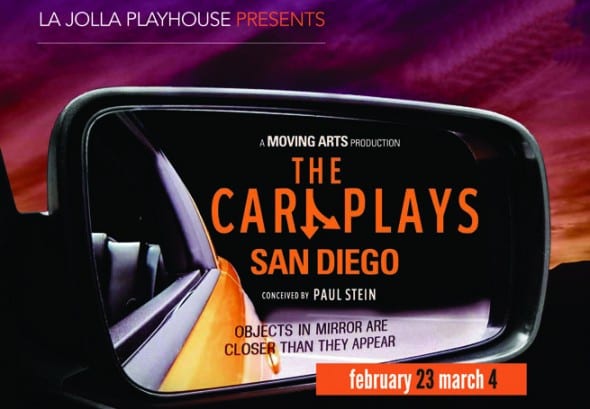 Disneyland by Paul Stein | Directed by Dana Schwartz
On their freeway-congested drive to Disneyland, Dad (Trey Nichols) pulls the car over to scold his two misbehaving kids. No Matterhorn ride and the long trip home might be the resulting possibility.

Alright by Alex Lewin | Directed by Robert Castro
After a family spat, a sullen teenager (Matthew Bohrer) decides to spend the night in his car. But his father (Eddie Yaroch) won’t let him simply stomp away anymore.

The Audience by Kiff Scholl | Directed by Matt Bretz
What is supposed to be a compelling night of site-specific theater, comically devolves, as the play never starts and the audience is forced to fend for themselves. With: David Youse and Ron Morehouse.

Before We Go Home by Richard Martin Hirsch | Directed by Darin Anthony
A couple (Michael Shutt & D.J. Harner) finds the prospect of a short drive home unexpectedly daunting after circumstances lead them to make a painful decision.

Two Fellas, One Fella by Paul Stein | Directed by Michael David (March 10 – 11)
Two men (Jon Amirkhan and Ronnie Clark) for hire attempt to score a package, waiting for them in an unknown vehicle. The pickup and expectant delivery does not go as planned.

The Duo by Jessica Smith | Directed by Jason Duplissea
On the fateful day of the Comic Con costume contest, two friends (Peter James Smith and Tony DeCarlo) confront the future of their dynamic duo.

Skipped by David Myers | Directed by Seema Sueko
A drunken teenager (Zachary Martens) tries to dodge the cab fare.  But this cabbie (Albert Park) is onto him. And he’s not taking it anymore.

Reveille by EM Lewis | Directed by Sam Woodhouse
Leonard’s only son has signed up for the military. He leaves for boot camp this morning. With Will Tulin and Michael Zlotnik.

Selkies by Lila Rose Kaplan | Directed by Casey Stangl
A secret is revealed when two old friends (Wendy Elizabeth Abraham and Rebecca Davis) visit the seals off the coast of California.

Am I Losin’ by Ron Klier | Directed by Ross Kramer (February 23 – 26, March 10 – 11)
Pat (Derrick LeMont) visits the old neighborhood and runs into Karl (Andrew Miller), who resents his successes.  Proof that, for Pat, you really can never go home again.

Outside, Looking In by Michael David | Directed by Sara Wagner (March 1 – 4)
A lonely, middle-aged woman of privilege finds unexpected compassion on the streets of San Diego. With: Lisa Goodman and Michael Mullen.

Dead Battery by Lee Wochner | Directed by Paul Stein
A bereft mother (Sara Wagner) searches for clues to her son’s death as she cleans out his car and struggles to cope with her loss.

One for the Road by Michael Shutt | Directed by Matt Thompson
One last drink, one last kiss, one last choice: One For The Road. With: Thomas Hall and Kevane La’Marr Coleman

We Wait by Steve Lozier | Directed by Lisa Berger
Two loyal dogs wait in a hot car for their owners, wondering if they will ever come back… With: Wendy Waddell and Judy Bauerlein

It’s Not About the Car by Stephanie Alison Walker | Directed by Claudio Raygoza
Vic (John Polak) surprises Marla (Rhianna Basore) with a car for her birthday, but all she really wants is a divorce.

The Carpool by Jennifer Barclay| Directed by Delicia Turner-Sonnenberg
Mr. Blackwell (Charles Maze) has been doing lots of naughty, naughty downsizing around the office. The members of the carpool (Samantha Ginn and Reed Willard) are out to set him straight.

The Love of Make-Believe by JJ Strong | Directed by Kiff Scholl
A maid-of-honor and a best man (Laura Buckles and Donald Rizzo) indulge in a post-reception tryst that leaves them both hopelessly caught between their pasts and futures. 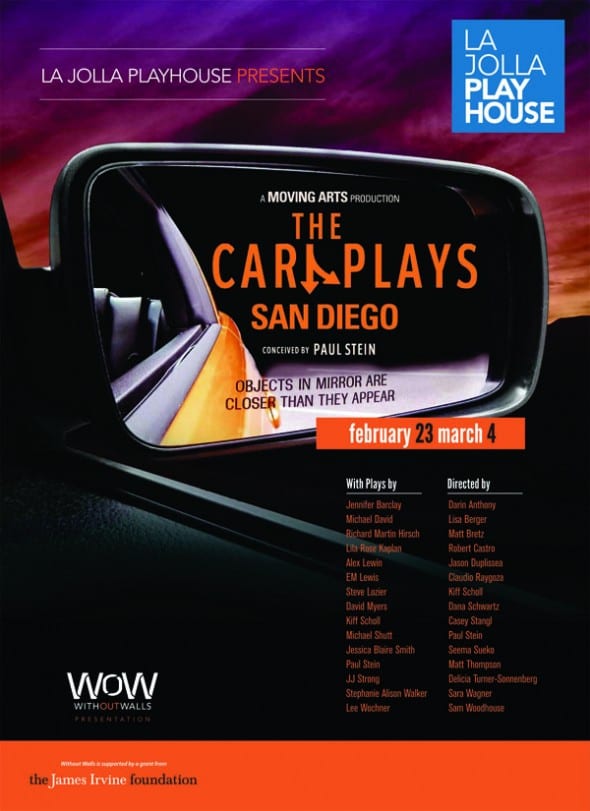