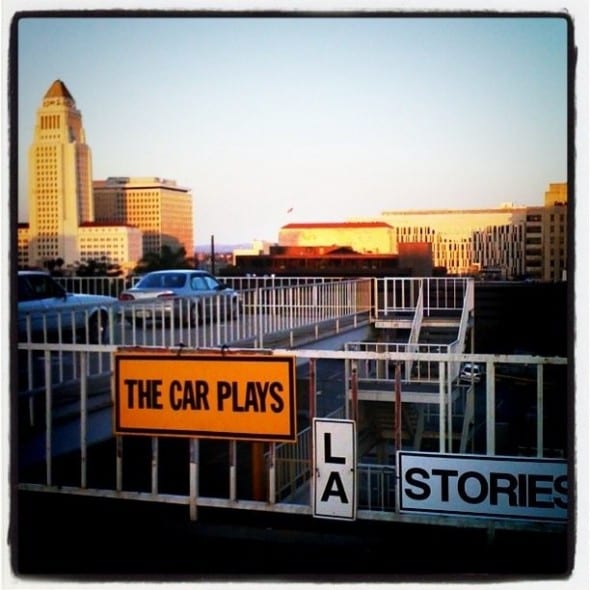 “Part of the power of The Car Plays is the sense it creates of somehow being implicated, simply by witnessing words and actions you can’t pretend to have missed or ignored (unlike in a darkened theater). And there’s the added irony that under normal circumstances, driving home from a difficult or demanding play can serve as a time to decompress. Here, instead of shutting out the world, you’re sealed into a series of new ones, whose rules are ever-shifting and anything but certain.”
– James Hebert, Critic’s Choice, Union-Tribune San Diego Read the review

The Car Plays is “a unique experience and it’s definitely worth checking out. So fasten your seatbelts and enjoy the ride.”
– Pam Kragen, Critic’s Choice, North County Times Read the review

“The Car Plays leave audiences with plenty to talk about on their drive home.”
– Angela Carone, KPBS

“Never has the infamous movie line “Fasten your seat belts, it’s going to be a bumpy night” more apt than in The Car Plays, a unique, site-specific theatrical offering that truly lives up to the idea of riveting, in-your-face theater. At times moving, and at times unnerving and uncomfortable, this intriguingly-conceived entertainment experiment really feels right at home here in the mobile culture of Southern California.”
– Michael L. Quintos, Broadway World Read the review

“The Car Plays” is the ideal candidate for the Segerstrom Center’s Off Center Festival of cutting-edge theater… provocative…”
– O.C. Register Read the review

“A great way to evoke all the drama that can take place inside parked cars.”
– L.A. Stage Times Read the review

“Car Plays is a brilliant and inventive concept, a kaleidoscope of situations that draw snapshot portraits from life, with soulful acting and cinematic detail that’s so close to home and physically intimate that it blurs the distinctions between theater and life.”
– L.A. Weekly Read the review

“The storied intimacy at even the smaller 99-Seat Plan theaters feels virtually Pantages-like when compared to the proximity of audience and actor at Car Plays.”
– Don Shirley, LA Stage Times Read the article

“This is perhaps the fun event of the week, sitting in the back seat of five different cars, watching a marvelous group of actors in five ten-minute “car” plays that vary in quality, but which are almost all riveting.”
– Stage and Cinema Read the review

“Each play features sound direction and skilled performers, but the most striking feature of Car Plays is the perspective and reaction altering intimacy created by the close proximity and shared space of the actors.”
– LAist Read the article