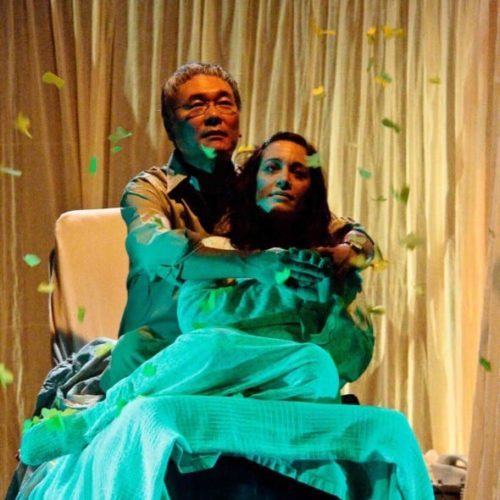 Called “The tiny Silver Lake theatre with an enviable reputation,” Moving Arts is dedicated to the production of original works.  Founded by Lee Wochner and Julie Briggs in 1992, Moving Arts has produced many world, national, West Coast and Los Angeles premieres.  Moving Arts began as a 22-seat venue in the Silver Lake area and quickly grew to become a resident artist company that includes actors, directors, producers, designers, and playwrights.

Since 1992, Moving Arts has continuously produced adventurous new plays in a variety of venues across Los Angeles, ranging from traditional theatres such as [Inside] the Ford in Hollywood and the Los Angeles Theatre Center, downtown to nontraditional spaces such as the Natural History Museum and the parking lot across from Disney Hall, showing remarkable versatility and commitment to the craft of theatre. Moving Arts has now taken up residence it’s new home the Atwater Playhouse.

Moving Arts’ new theatre home is located in the Atwater Village neighborhood of Los Angeles, California. We acknowledge our presence on the traditional, ancestral, and unceded homelands of the Chumash, Kizh, and Tongva people, who resided here and stewarded this land before the city of Los Angeles was formed. Los Angeles County is home to three Native American Indian tribes that predate the establishment of California Missions: the Ventureño, Gabrieleño, and Fernandeño. Indigenous people from these and other Native nations who reside in Los Angeles County have made innumerable contributions to the place in which we live. The City of Los Angeles holds the second largest percentage of Native Americans in the United States, totaling around 54,236 people. Los Angeles County, home to more Native Americans / Alaska Natives than any other county in the United States, totaling around 140,764 people. We hope this brief land acknowledgement serves as an invitation for you to learn more about these Native nations and what we all can do to stand in solidarity with them.

“Moving Arts is an exhilarating, enriched welcoming for offbeat, unusual new plays which otherwise may not be produced.”

“Moving Arts has won bucketloads of awards but more important, their projects generate enough buzz to graduate into larger theaters.”

“Moving Arts has been consistently garnering attention and acclaim for its steadfast loyalty to original works.”

“Critics and adventurous playgoers have acclaimed them for producing new plays which offer something special in a black-box theatrical environment.”

“…Why we should stop watching sitcoms and go to the theatre more often.”

We are offering a small theatre gem in the heart of Atwater Village. It’s very clean, with 45 fixed theatre seats all with ample legroom, high ceilings at 11 feet, a stage that is 18.5 feet deep and 19 feet across. We have a dressing room with three dressing stations plus more room for changing costumes, props, and costume storage. We have a small lobby entry into the actual theatre. Our theatre sits right next to a large parking lot with 75 spaces. Our entrance is covered which allows for outside gathering before or after a performance or meeting. We have a full lighting package with a programmable light board. The sound system is basic with two very loud speakers that more than fill the acoustically rich space. CONTACT: rentals@movingarts.org or call 323.472.5646.